Want to hear the most annoying sound in the world? No? I didn’t think so; neither did Mike Starr who played Joe Mentalino in the movie Dumb and Dumber. Harry and Lloyd had one hell of an adventure cross-country in the customized 1984 Ford Econoline van known with a sign on the side called Mutt Cutts. The set up for the movie

started when Lloyd was driving Mary Swanson (Holly) to the airport and she leaves behind a brief case. Lloyd realizes the plane has left already so then Lloyd is hell bent on returning the briefcase to her and maybe catch a date in the process! Harry Dunne is Lloyd’s childhood friend and they jump in his Mutt Cutts van and start their trek and thus so begins a movie that inspired an animated cartoon, a 2003 prequel and a sequel to be released in November 2014.

The 16 year span of the Econoline style started from 1975 – 1991. For the new generation the Econoline was given a ground-up redesign using a new platform. The engine was moved forward and the hood was lengthened and flattened to give the driver and passenger a bit more room up front. The van was sold with two wheel bases and three different body lengths. The standard Econoline 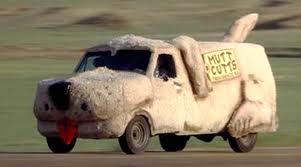 Dumb and Dumber came out in 1994 and I still remember going to the movies and laughing so hard at some of the jokes Lloyd and Harry came up with. Once thing I can remember and will most likely never forget is when the two of them finally make it to Aspen on a scooter with frozen snot all over their faces and of course being stuck together because of another disgusting thing that I care not to mention here! I haven’t seen the movie in years but I did watch the new trailer for Dumb and Dumber Two and it looks like it will hold up to the hype but of course only time will tell! Let’s hope it turns into another cult classic like the first one! See you next week for our next Iconic movie car.